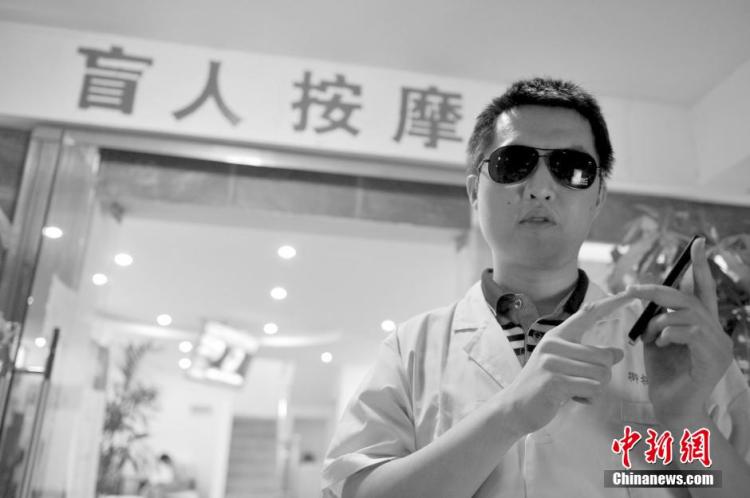 Blind Massage Parlour is an interesting place. It is probably one of few places in China where blindness can be blatantly and especially socially visible. Often all Chinese pedestrians’ lane have tracks for the visually impaired but they don’t seem to be regularly maintained or even properly built. In general, disability is purged from the main streets and of course result in poor chances in the job market. Blind Massage Parlour is, stereotypically, where (predominantly male) blind people work as masseurs. The urban myth is that blind people, since they cannot see, have enhanced haptic senses and strong hands. All that comes from training rather than natural talents of course but myth still persists to make blind people remain in their place.

I have a chronic neck problem but I cannot afford regularly doing massage in Australia. Blind massage parlour is very appealing to me because it is cheap and it does help with my neck pain. The following is a abridged conversation between three masseurs while they were massaging me and my two friends.

Masseur A: What phone are you using?

Masseur B: Just a Xiaomi. Why?

Masseur A: Xiaomi is pretty good these days. Xiaomi Mi Mix even has the full glass bezel-free display, super high resolution and good screen estate. It’s great to watch videos on it. [more detailed discussion on the features of the Xiaomi phone omitted] and most importantly, it is a good bargain given its specs.

Masseur B: What about Huawei?

Masseur A: Huawei phone P2 has amazing camera. Huawei is doing great. The best Chinese brand now. We have a lot of good brands, Vivo, Oppo, and Cuizi etc. [more detailed discussion on the features of each brands omitted]

Masseur B: What about Samsung? Don’t they always have like better specs.

Masseur A: Well it just phased out in China after the incidents of explosion. I think Huawei would not have a chance against Samsung if they didn’t have that disaster. Well, I guess they also did produce good phones. And no, these days almost all smartphones come with similar processors, the only difference is probably the camera and RAM.

Masseur B: What about iPhones? I think iPhone’s quality is shit. I bought my wife a secondhand iPhone recently. It broke down after a few weeks. So I had to go fix it somewhere. Don’t iPhone have like the best cameras?

Masseur A: Did you buy secondhand, without a proper warranty? Of course they are going to scam you. iPhones are usually of good quality but they run of good ideas now. After Jobs died, they failed to innovate and lead the market.

Masseur B: Alright. I will look into it.

Masseur C: Did you hear in the news? US now prohibits their companies from selling their chips to us. What about our phones? They don’t care about the Chinese market no more?

Masseur A: of course, eventually they won’t touch the consumer products. Who does not want to make our cash?

My friend finally could not suppress his urge to question their discussion on smartphones since we were told by the reception that “they are almost blind” and the whole discussion never touches on how any of these brands provides technical assistance to people with disabilities, and asked,

“why are you guys (awkwardly pauses) talking about these again?”

I looked into my masseur in the eye after he finished. I felt immensely guilty, not just for doubting his blindness but more importantly how I have been oblivious to their views on technology.